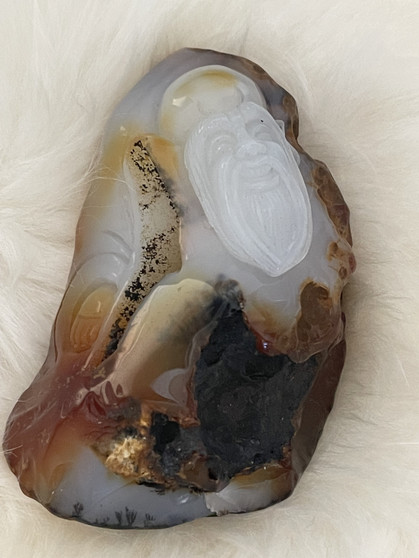 Hand carved Deity is a beautiful piece to keep on your desk, shelf or nightstand.

This carving is polished and does not have a flat bottom. Good luck as a paper weight.

Carnelian is a brownish-red mineral that is commonly used as a semi-precious gemstone. It is an orange-red variety of chalcedony, a cryptocrystalline quartz mineral. It is a member of the chalcedony family. It is a translucent to opaque variety of quartz.

The Carnelian goes back to Ancient Egypt where it took on many roles, from being a stone of fertility to stimulating passion and even provide courage to the ancient warriors and fighters.

Outside of Ancient Egypt, Carnelian is used by wizards. They would utilize the energy of this powerful stone to trigger other stones. Many also considered the stone to be a status symbol and wearing it would protect one from sickness and help avert any calamities.

Carnelians are said to help fearful speakers become bold and eloquent. In ancient times, warriors wore carnelian around their necks for bravery and to enhance physical power during combat.

Master architects in Ancient Egypt wore them to show their ranks and, in the Middle Ages, alchemists boiled the stone to activate the energies of other chalcedonies. As the first stone in High Priests’ breastplates in ancient times, carnelians symbolized the blood of the martyrs and kept illness and plague at bay.

Carnelians are said to balance and open the sacral chakra, which stores our creative and sexual energies. This energy point is orange, just like the crystal, and attracts power, boosting vitality.  The carnelian has connection to three lower Chakras, the foundation of them all being Root Chakra. This is the Chakra that keeps us grounded and in balance.

The stone is also connected to the Sacral Chakra, and the crystal healing abilities of the carnelian include boosting listless attitudes and stimulating appetites.

The final Chakra is the Solar Plexus Chakra, the Chakra that governs our personality, identity and ego. It gives us our fighting spirit and thus the carnelian will support us in whatever obstacles we face.

Carnelian stones are also said to be magnets for prosperity and good luck. It’s often used by people when they need a healthy dose of good fortune, making this a lucky stone. Because it also functions as a crystal of ambition, determination, and drive, it’s believed that Carnelian helps protect the wearer from the sluggish energies of incompetent co-workers.

This Opalite Crystal Massage Tool is used for pain management. Use as a roller over tight muscles. T…

This beautiful Copper Tara sculpture is in good condition with wear commensurate with age. No major …

Chrysocolla Stone Heart Use this stone during meditation for added peace and tranquility. A perfect…

Bronze Laocoon and Sons Statue. Vintage.  A beautiful addition to a personal alter, or den. Gi…