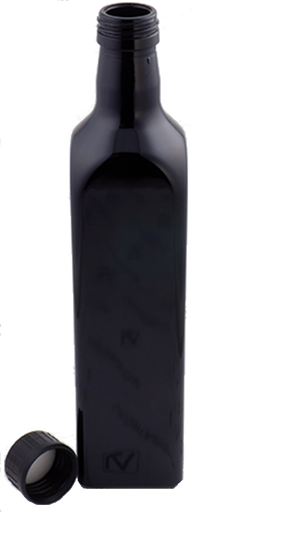 
Ever since the beginning of glass production, approximately 3,500 years pre Christ, violet or golden containers/bottles have been used exclusively to preserve precious salves, oils, essences and alternative medicines. Today, thanks to science, we know that life (energy) is best preserved by Violet, and no other spectral range can compare.

Handmade in Europe by Miron Glass.

Biophotons as a bridge to vitality?

By the insights of bio photonics, the conventional conception of the organism as a being well separated from the environment can be replaced by the vision of openness and transparency of the individuals existing in a state of permanent exchange or interdependence actually. Moreover, the presumption is corroborated that in our organism as well as in the environment, in addition to electromagnetic fields there are probably existing further largely unknown and immeasurable fields as they were already proposed by Carl Huter. This German anthropologist assumed in the year of 1904 already, that all living existence is based on radiation, and as a vision he saw the light controlling and coordinating all processes in the living cell. Brilliantly, he postulated that matter consisted not only of the two qualities of static (magnetic force in the atomic nucleus) and dynamic energy (electrical power in the electron sheath of the atomic model ), but also carried a spiritual energy. As a hypothesis, he positioned this “sensitive energy” as an elementary power into the physical matter, and according to his opinion this energy evolved into an increasing consciousness, developing from elementary particles via atoms and molecules up to the vital force of the living cell. With his hypothesis of the “sensitive energy” as a third elementary power besides the static and dynamic energy, a door was opened to the “subtle fields” as proposed by Albert Einstein. Also the energy of life “Chi” in the Chinese medical science and acupuncture belongs to this area. Similar views are found in all medical traditions of the cultures all over the world. Also the occidental medicine, from Hippokrates, the Greek founder of medical science, up to the romantic period of the early 19th century, acted on the assumption of the existence of such a vital force, and it was thought to be the principal duty of medical practitioners to support the modulating and healing power of it. The radiation of bio photons seems to be strongly coupled with this vital force of all creatures and represents its content of high-grade energy and potential information as a physical quantity to be measured.

Biophotonic glass, also known as Miron or NHT Violet glass, is a type of deeply …

Natural Healing Tools Crystal Chakra pendant is unique. When you wear it, it promotes beauty, health…