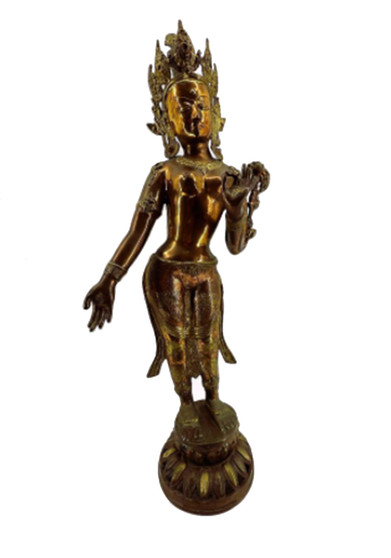 This beautiful Copper Tara sculpture is in good condition with wear commensurate with age. No major damage to notate. Some tarnish to the patina.

Tara, Tibetan Sgrol-ma,Buddhist saviour-goddess with numerous forms, widely popular in Nepal, Tibet, and Mongolia. She is the feminine counterpart of the bodhisattva (buddha-to-be) Avalokiteshvara. According to popular belief, she came into existence from a tear of Avalokiteshvara, which fell to the ground and formed a lake. Out of its waters rose up a lotus, which, on opening, revealed the goddess. Like Avalokiteshvara, she is a compassionate, succoring deity who helps men cross to the other shore. She is the protectors of navigation and earthly travel, as well as of spiritual travel along the path to enlightenment.

Tara is an indoor sculpture. Tara is shown with the Maya sculpture (sold separately). Pictures are taken in various environments to show how the light changes the sculpture.

Hand carved Deity is a beautiful piece to keep on your desk, shelf or nightstand. This carving is p…

Bronze Laocoon and Sons Statue. Vintage.  A beautiful addition to a personal alter, or den. Gi…