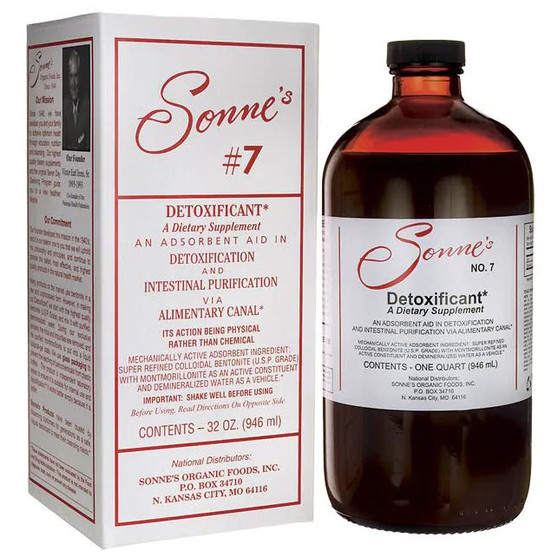 Hydrated Bentonite Clay. Excellent product for those wishing to easily and effectively cleanse their colon. Our Sonne Detoxificant #7 is a natural and powerful detox supplement derived from bentonite, a mineral-rich volcanic clay. For centuries, native tribes around the world have recognized and benefited from the healing properties of bentonite clay in internal and external applications. In the early 20th century, bentonite clay was used by the British Army in India to treat acute bacterial food poisoning and in China to help treat cholera. We use a special process to refine the raw bentonite clay to remove mica, dirt and other impurities, in order to concentrate the active detoxifying ingredient, montmorillonite ("mont-mor-ill-o-nite"). This procedure places montmorillonite into a colloidal suspension and retains its innate negative charge. These properties allow the powerful adsorption (physical binding) of positively charged substances. (Most metabolic, environmental, and chemical wastes are positively charged.) Montmorillonite possesses the ability to adsorb about 40 times its own weight in positively charged substances present in the alimentary canal. Because montomorillonite has such strong absorptive properties and is not digested, it tightly binds toxic material to be excreted.

Sonne Detoxificant #7 is used in conjunction with our Sonne Seven Day Detox Cleansing Kit. And can be used for general colon health, and digestive support.

• During our exclusive and secret process, mica and impurities are removed, leaving the purified montmorillonite in a liquid colloidal-gel state.

• We routinely use an independent laboratory for heavy metal and microbiological analysis.

• Due to our product's extreme drawing properties, we package our Detoxificant in glass bottles to avoid leaching petrochemicals from plastic bottles.

• Montmorillonite possesses the ability to adsorb 40 times its own weight in positively charged substances present in the alimentary canal. (Most metabolic, environmental, and chemical wastes are positively charged.)

Bentonite is not a new product. Primitive tribes of various continents have been using volcanic ash for centuries for various conditions of ill health. Primitives used to carry with them a ball of bentonite clay, which they would mix with water. They would dip their food into it before eating to prevent "sick stomach". Liquid bentonite was used for centuries in China for summer diarrhea and cholera. In 1712, Father Deutrecolle, a Jesuit Missionary, described the clay works in China and mentioned that the clay (bentonite) was used for diarrhea. The use of bentonite as an adjunct to medications during the Balkan war of 1910 helped to reduce the mortality from cholera among the soldiers from 60% to 3%, and also proved valuable in the 1919 cholera epidemic in China. In India, bentonite was found useful for acute bacterial food poisoning encountered by the British Army. For over 50 years, we have made this ancient secret available for modern man. Imagine, a natural clay that can draw pesticides, clean and disinfect wounds, support immune function, and make food and water safe for consumption - without side effects!

Bentonite is a natural clay mineral formed in the extreme heat and pressure of a volcano. In ages past, it was blown into the sky by volcanic action, and sifted down to earth to help impregnate the soil with its 25 - 35 trace minerals. Sometimes it accumulates in layers or veins from which it is presently mined. Although bentonite contains a rich amount of minerals, there is no evidence that we can absorb any of its mineral content. Anyone who tries to sell the product on the basis of the minerals in it is only guessing.

Many products on the market use bentonite in a raw and unprocessed form. However, Sonne bentonite is different. In making Sonne Detoxificant we start with the highest quality bentonite (U.S.P. Grade), and mix it with purified demineralized water. During our exclusive and secret process, the mica and impurities are removed, and the purified montmorillonite is put into a liquid colloidal-gel state. The product is sterilized and subjected to independent laboratory analysis for heavy metals and microbiology, ensuring a substance suitable for internal use and detoxification. It works better simply because it is better.

Bentonite should never be packaged in plastic. Because of its extreme drawing properties, bentonite can leach petrochemicals from plastic bottles. That is why Sonne only packages Detoxificant #7 in inert glass bottles.

The Expert's Opinion Dr. Robert T. Martin is a mineralogist and one of America´s outstanding authorities on bentonite. According to his research, its action is due to five characteristics:

3. Seen under a high power microscope, bentonite is composed of extremely minute rectangular particles in the shape of a credit card. The wide surfaces are negatively charged and the edges are positively charged. Therefore, its absorptive power is many thousand times more negative than positive.

4. The very minuteness of its particles gives it a large surface area in proportion to the volume used, enabling it to pick up many times its own weight in positively charged particles.

5. To obtain maximum effectiveness in the human body, it should be put in a liquid colloidal-gel state. This is why we do not keep it as powder or put it into a tablet form to save shipping costs.

Dr. Martin stated that one gram (1/28 ounce) of our product has a surface area of 800 sq. meters. This is 40 times that of its commercial competitors. The larger the surface area, the greater its power to pick up positively charged particles (toxins). An edition of the Dispensatory of the United States of America states: "In aqueous suspension, the individual particles of bentonite are negatively charged, this resulting in a strong attraction for positively charged particles and being responsible for the ability of bentonite to clarify such liquid as contain positively charged particles of suspended matter." Since bentonite has such strong absorptive powers, its consumption could theoretically render unavailable some nutrients, as certain vitamins, by adsorbing them from the alimentary canal. However, independent experiments designed to find out how much such adsorption might adversely affect the growth and health of experimental animals indicated no ill effects when the intake of bentonite was 25% of the total diet. (Reference: Annals of the N.Y. Academy of Science, Vol. 57, page 678). Our product is mostly water, with only a small proportion of bentonite. In order for the bentonite in our product to reach a toxic level (i.e., 50% of the total diet) it would be necessary to consume a 3-year supply each day for an extended period of time.   Montmorillonite is classified as a hydrated aluminum silicate. But, it is very different from the aluminum used in cooking utensils, deodorants and other preparations. The aluminum molecule is integral to the structure of montmorillonite, and cannot be removed by normal digestive processes.

Make your own Daily Cleansing Drink! A perfect accompaniment to #7 Detoxificant is our #79 Intestinal Cleanser. Mixed together in juice, this Cleansing Drink offers the scrubbing and roughage benefits from soluble and insoluble fiber from psyllium, and the detoxification properties of bentonite. This product is a key component included in our 7 Day Cleansing Program. Our DETOXIFICATION product is offered only as a nutritional adjunct insofar as it has a cleansing action, and not for any disease, ailment or other specific condition of ill-health. Nothing stated above shall be construed as a claim or representation that such product constitutes a cure, palliative or ameliorative for any such disease, ailment or condition.

Sonne Detoxifcant #7 has labeling has been recently reviewed by the FDA. However, these statements have not. Please review supplement use with your personal medical professionals.

Recommended Dosage:
For average adults, take 1 tablespoon. For others, take 1 teaspoon for each 50 lbs. body weight.
Directions:
Take 2 doses per day. The first one in warm water upon rising in the morning; the other undiluted at time of evening meal. It is important to drink plenty of water between meals to assist in elimination. It can also be taken in conjunction with #79 I
Literature:
"Addressing the Aluminum Issue in Detoxificant"
Freeze Warning:
This product is not shipped when the temperature is below freezing.
Shipping:
From Arizona
×