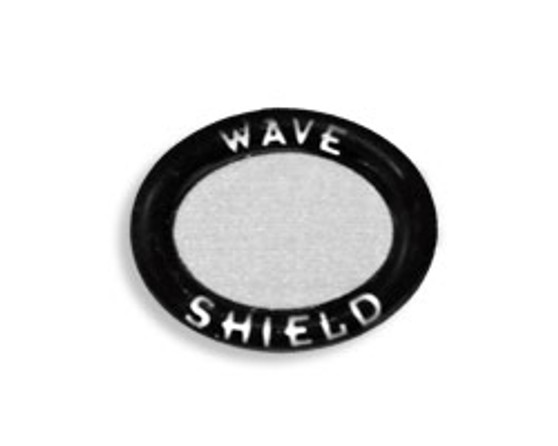 The WaveShield Oval features a soft comfort cushion design about the size of a penny that adheres to the ear piece of any cellular or cordless phone depending on the size of the earpiece and acts as a cellular protection system blocking up to 97% of the microwave radiation.

How was the Wave shield tested?

The Wave shields were tested by a U.S. government FCC listed lab on several phone models with the following results. Waveshield series 1000 for cell phones and series 3000 for cordless phones block up to 97% of the radiation from entering the inner ear.

Answer: E.M.R. refers to Electromagnetic Radio-frequency Radiation which is the potentially dangerous frequency emitted by cellular or mobile phones. High frequency ionizing forms of radiation exists as X-rays, Gamma rays and forms of nuclear radiation known to be hazardous . Non-ionizing radiation of lower frequency ionizing forms such as early cell phones were thought to be safe. That view has changed since cell phones and mobile phones have grown in strength from low-level radio waves to high-level microwaves. No scientific study has proven conclusively that the use of cellular phones is hazardous to human health, yet continued use of higher frequency phones could adversely affect the central nervous system, diminish the effectiveness of the immune system and facilitate the development of cancer according to scientific research. Perhaps this is why governments and health organizations worldwide are spending millions of dollars towards on-going research to determine the long term effects of exposure to E.M.R from cellular and mobile phones.

Answer: S.A.R. or Specific Absorption Rate of Radiation is used to measure the amount of radiation that the human body absorbs from any source, including cellular phones. The F.C.C. (Federal Communications Commission) sets limits as to what they deemed were safe levels of radiation from cell phones. In the beginning when analog phones were 800-900 MHZ of power, most of the cell phones manufactured met these safe guidelines. However as manufacturers raised the power of their phones up to 1800-2000MHZ and analog was replaced by digital, the majority of the cell phones now exceed the safe levels set by the F.C.C. In fact the manufacturers continue to lobby to have the levels raised, so they may keep increasing the power of the phones.

The highest S. A. R. in the body is in the ear, thus the concern about excessive cell phone use and the strength of the signal.

Question: How is S.A.R. measured on a cell phone?

Answer: When a call is made or received there is a band of radiation from the antenna, half of which disappears into space. The remaining radiation is around the skull, face and ear area of the user and runs through the circuitry of the phone when transmitting the call. For the test, a dummy head is immersed in a gel-like solution similar to body fluid and a cell phone is attached to the ear. Readings are taken from the antenna to determine the S.A.R. strength which will vary from phone to phone and proximity to the closest signal tower.

Question: What is the difference between a Radio Wave and a Microwave?

Answer: Radio Waves are low levels of transmission power for signals to and from your phone. These non-ionizing frequencies of radiation are safe. However as signal strength grows from a few hundred MHZ of power to beyond 800 MHZ, the electro-magnetic spectrum increases and these waves become microwaves. For example, the older mobile house and office phones were a few hundred MHZ of radio waves but the farther you moved from the base, the weaker the signal became and you would lose the call or it would break up. Now mobile phones are 900MHZ to 2.4GIGS or more of power so you do not lose the calls as you travel from room to room or go outside, but your phone is now into Microwaves/infrared waves of radiating power.

The EMF emissions from our modern equipment is tremendous and potential extremely harmful according to the World Health Organization. Learn how to help protect yourself and your family!

This product has been discontinued. Limited stock available.

Smart phone:
Depending on model, place over speaker or battery cover. Can be placed under case.
Computer or Laptop:
Best protection is 4 on each corner of the screen.
×

If you are looking for protection from any, and all forms of EMF, human negative energy, Geopathic s…

Ki-Bal is a mini P.e.Bal Pyramid, on a keyring! Clear EMF and geopathic stress. Plus take with your …

This is electromagnetic protection and energy balancing as you have never seen it before! The Nu-Me …